I guess most local people know that this Friday, 11th April, is the 25th Anniversary of the announcement that the Settle-Carlisle railway line would not close.
On Friday a very special locomotive hauled train of nine carriages runs from Leeds to Carlisle via Settle carrying hundreds of people, many of whom were involved in saving the line, in government, British Railways etc.   In other words both ‘sides’ of a heroic campaign.   There has not been a significant attempt to close a railway line in the UK since.   Then Transport Minister Michael Portillo will be on board,
Church bells will be ringing in Settle and flags will be flying.
It is hugely important that today’s generation remember that this magnificent railway was once doomed to disappear for ever.   Here is the opportunity for them to be reminded and for the town of Settle to say ‘thank you’.
We would like to make this point visually and memorably for the media on the train too.
We are asking parents and children to come to Settle station for 1055 on Friday morning and to bring with them something red to wave at the train – Railway Children style.   It should make a powerful statement.   There will be Friends of the Settle Line on hand to help with ‘crowd control’. 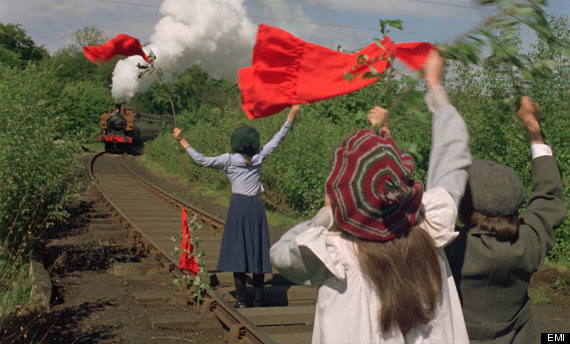 Settle schools will be on holiday so I wonder if you would put out this appeal right now on the social media and see if Settle’s children can rise to this challenge?   Please ask for RTs etc
There will be a small souvenir keepsake for each child from the Settle Station shop.
Mark Rand
Past Chairman, Friends of the Settle-Carlisle Line
Train leaves Leeds 0930.   See below for precise timings:

It will flash through non-stopping stations.   It will go very slowly through Garsdale so that people can see the statue of Ruswarp.

Return to News
All News Articles
Email us at editor@settle.org.uk Find us on Facebook Find us on Twitter