This report was written as a press release after the meeting.
(A second report -with suggestions about actions to take can be seen here). 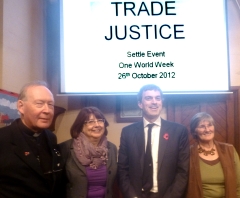 Churches Together in Settle and District arranged an educational evening on “Trade Justice” on Friday 26 October, which was during ‘One World Week’, when we consider the needs of other nations.

The informative talk was given by Liz Taylor, representing CAFOD, the official overseas development and relief agency of the Catholic Church in England and Wales.

Mr Smith pointed out that all the main UK political parties were broadly in favour of using 0.7% of our GDP for Development Aid, although in these hard times many people are not in sympathy with that policy.  He is in a significant role to be aware of these issues, so we were very pleased that he took the time to attend.  He encouraged us to become involved in these matters and to join in the campaigns to address the injustices.

Liz Taylor had attended the G8 Summit in Rostock (Germany).  The plight of developing nations became clear to her: many of them could only afford to send one delegate to the Summit, so were disadvantaged straight away, as they were unable to take part in seminars which ran concurrently, and decisions were made always to favour the wealthy countries. 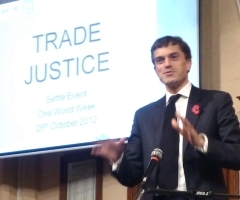 Those gathered in Settle heard that there is real concern that current trade rules hamper the attempts of poor countries to use trade to move them out of poverty. Massive subsidies given by EU & USA to their farmers make trade more difficult for poor nations, whose farmers receive no subsidies. Subsidies often lead to over-production and surplus products are then exported to poor countries for sale at very cheap prices.  This then makes it very difficult for local farmers to sell their produce at a realistic price.  Many countries impose tariffs, a kind of tax on imports, and these too make it very difficult for farmers in developing countries to export their produce.

The Trade Justice Movement campaigns to persuade governments and international bodies to rewrite unjust trade rules such as those above.  It campaigns for trade rules that will not harm people in developing countries but will benefit them.  Nelson Mandela said of the Movement: “Trade Justice for the developing world… is a truly significant way for the developed countries to show commitment to bringing about an end to global poverty.”

Return to News
All News Articles
Email us at editor@settle.org.uk Find us on Facebook Find us on Twitter